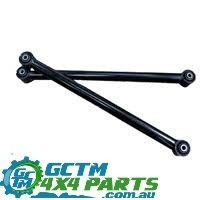 Why upgrade your Trailing Arms?

If you have a look under your vehicle, you might see that your rear lower trailing arms are bent (as per image on the left). This is due to the thin walls, and an upgrade is recommended. Bent lower arms can result in diff pinion breakage.

Why aren’t the lower arms ‘adjustable’?

The lower arms Roadsafe run as a fixed length – either standard, 11 or 16mm extended. Being low and close to the ground we want to avoid nuts and threads that can get caught up… plus after the first run in the bush any exposed thread on a lower adjustable arm gets damaged anyway, so any further adjustability is no longer a viable option. Plus, the lower arms require strength, so they don’t get bent, the turnbuckle on the lower arms simply creates a weak point that will create issues in the long run.

What is the ‘BENT’ upper adjustable arm for?

The TANP47AB is designed with a bend to allow for clearance of aftermarket long range fuel tanks. If during articulation you hear a bang on the rear of the driver’s side, odds are your RH rear upper trailing arm is fouling on your fuel tank. At full droop the Roadsafe TANP47AB’s bent design provides for clearance of the fuel tank. Recent upgrades now include a greater radius in the bend to allow for better articulation and droop. You can fit the ‘bent’ upper arm alongside a standard upper arm, providing you set the adjustment to replicate the bushing to bushing centre dimensions of the original arm. It is recommended if fitting a ‘bent’ upper arm to also upgrade the other side with Heavy Duty Adjustable, so as to maintain the same ‘strength’ in both upper arms on both sides.

What Bushings are supplied in the Arms?

In the Prado rear lower trailing arms Roadsafe include a high flex rubber bushing as standard. The arms are also available with an alternative Genuine rubber bushing for those customers who are keen on maintaining genuine rubber.

What Colour are the Roadsafe Upper & Lower Rear Trailing Arms?

Originally the Roadsafe Arms were gold anodised. However over the last 2 years there has been a progressive change to a black e-coated style arm. Aside from the longevity and ‘meaner look’, the black e-coat allows for a more discreet installation.

Under NCOP V3 (VSB14) the replacement trailing arms are street legal. They are a standard replacement item, fitted with no additional modification to the mount points or similar required.

Save this product for later
Display prices in: AUD